I have never shared this story before. I saved it till now.

In summer 2013, five months pregnant with our first child Evan, Matthew and I went to the woods to take some pictures. My first pregnancy, the joy of my growing bump, we forever recorded in monochrome pixels dancing between trees of the Ashdown Forest. 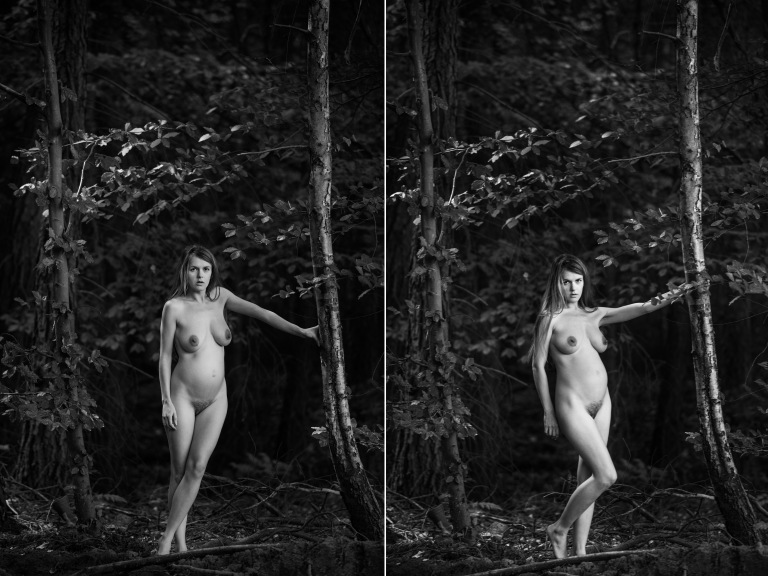 And as I put my clothes back on and wandered around, I came across something left in the hole of a tree stump.

What was it? It was a bouquet of flowers, a week or so wilted, with a card beside. I had to open and nosily see what it said.

“Dear son”, it wrote, “5 years since we said goodbye, and the pain is the same”.

Hmm, what a sad thing to stumble across during the photoshoot of my first pregnancy, I thought. Bit depressing, really.

Little did we know at that point that we were pregnant with a child who would die. Nor did we even know he was a boy. Our own son, whose fate was already spelt at conception with a fatal condition bilateral renal agenesis / Potter’s Syndrome. We would find out 3 months later during a scan that Evan had failed to develop kidneys as an embryo, and would not survive.

He died as he was born, on a night that winter in our bedroom on 11th December 2013.

Like the mystery parent who wrote the card, it’s now 5 years later for us.

Do I feel the pain is the same?

No. Five years ago the pain was searing. And because I let the pain sear through me I think it healed me.

Not just from the pain of losing Evan, but all my life I’d been quite a melancholy person, sad within my bones. So upon the awful diagnosis I feared that would end me.

Instead, I think it cured me. Just like Alice cried herself a pool of tears, that pool of tears was what carried her through the keyhole of a locked door and onto the other side. Just as in the principle of homeopathic medicine ‘like for like’, this big dose of sadness came and cancelled out all the sadness within me. I still cry over things, but more from pregnancy hormones or momentary emotion, not from a deep internal sadness that my life is somehow wrong. I am happy being me, happy with my life.

And when I look at our 3-year-old daughter Lilith, I feel with a perspective now just how much worse it would be to lose a child who actually lived. We didn’t get chance to know Evan. There’s almost relief he was gone as sweetly and swiftly as he came. He didn’t make so much of a hole in our lives as would the loss of an older child whose dancing, yells, snores, and floods of toys fill to the brim the the daily landscape of a parent’s life. Mostly I just smile for Evan. I still don’t really feel that he ‘died’ in the way we use that word for suffering, bleeding, ageing humans… he passed through like a butterfly.

Another life now wriggles warm in my womb. Another strong little girl, for whom precious gratitude of her assured health makes me know that after creating new life twice since, it just would not be right to be sad. I continue to receive astounding messages from fellow loss-parents who tell me my story of Evan helped them keep going. I beam as best I can express through keyboard emoticons, a mother’s pride for what her son did.

So I think back to that card I found and ask myself: is the pain is the same? The tears of love are the same. Pregnancy hormones make me flood and burst as I watch a video of me holding Evan, I long to hold him – that’s all – I don’t care for anything else – I just love you Evan, I want to kiss your cheek just as I kiss Lilith’s. But I finish my tears and I smile happy with my life. All a parent wants is for their child to be ok. And like I said when Evan was born, he’s ok.

No, my pain is not the same.