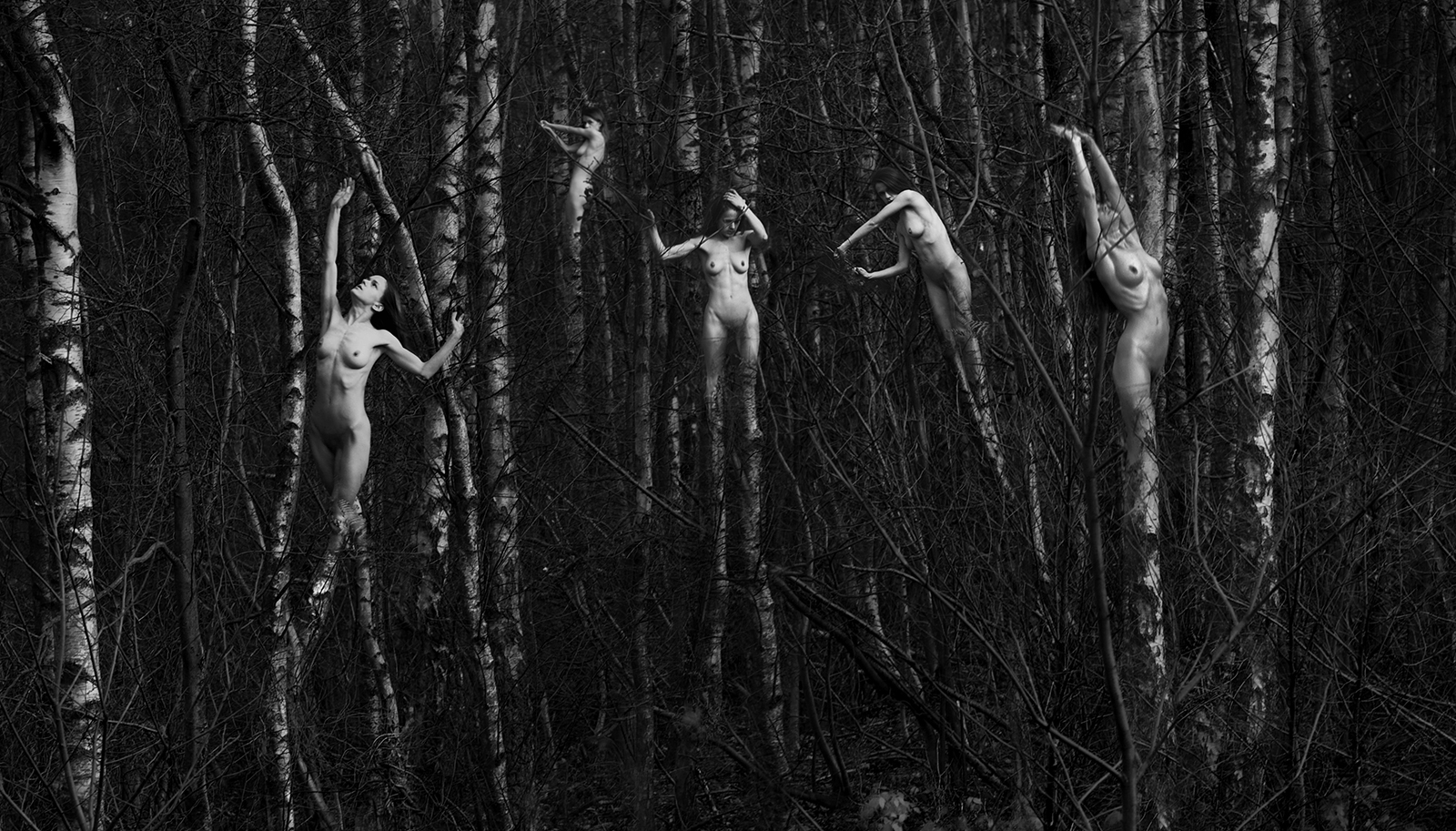 We are moving on. Five years we have spent in the garden of England, Kent UK. It’s the most time Matthew or I have spent anywhere since both of us left home, and it’s with sentiment but anticipation for a new start, that I look back on the time spent here.

Our arrival would have seen a girl in a long yellow rain mac, going excitedly from car to house and back again with plastic storage boxes, who despite the inclement weather that day was thrilled to be surrounded by such space – space that we had to check, on our first viewing, was really all ours. A shed, a summer house, a long garage, and a secluded garden and I did not waste much time before I posed with them for self-portraits that landed on the pages of my second Ilex book, back when our now-unruly hedges and plants were tame and tidy from the expert hands that once preened them.

We were in a phase of shooting what we fondly called ‘dystopian’ nudes… female flesh against drooping cracked trees and torn landscapes of rural Kent. Autumn, my favourite time for the adrenalin rush of cold toes on hard ground, the lack of banal summer green and mostly absent creepy crawlies. Carefree, I threw my pre-child maiden body on dirty ground, assembling the final images that radiated fecundity. Unmarried but secure in our bond, the time to try was imminent. Books arriving from Amazon, to better my nutrition and unlearn the common fear of birth; jogs around the orchard muttering words of affirmation for the baby I was yet to conceive; preparing, in mind and body, trying to habitualise a better default lifestyle for future children to learn from.

Along came Virginia. I spied her online and had long decided I’d pay to have her by my pregnant side. Through the lounge window you would see her first peppermint tea of many, a third of it left cold on the coffee table in a Lichtenstein mug next to her folder of midwifery paperwork, and such a little victory was it for me to finally meet her that the cold mug sat on the table for a couple days before it was cleared it away. Then followed months of belly-gazing fondly in a many-mirrored house, journalling to that mysterious kick-flip within, and trusting beyond the first 12-week scan that there was no need to pry through the oven door any more: let it bake.

The expectant couple at 32 weeks arrive home in a cab from LA, happy and exhausted from their last photoshoot for a while, only to reappear on that driveway a couple of days later with morose faces. The corridor would have heard my cry out in disbelief when Virginia read out the fatal prognosis; many more meetings that now all start with a hug, as the they summon strength to say hello and goodbye to their baby who, due to a rare anomaly would not live once her left her body. The living room couches join together for the desperate evening-long need for each others’ constant touch; cream teas and tears are shared on the garden blanket; she sits up late staring into a bright screen of research, seeking other mothers in history to know which way to turn. They decide to wait; weeks amplify the loneliness and yet extinguish the fear. Then in misty mid-December, if you were standing outside the bedroom door you would have heard a mother cry out to her first child in his last heartbeats; a black cat wandering in to see what all the fuss was about; Virginia leaving the next bitter cold morning with a covered precious bundle in a basket. A week later that precious bundle returns as a small white coffin to spend its last hours above soil, with his mother in a faux-fur coat who manages a proud half-smile for a photo, and drinks tea as she tucks in her lifeless son a week before Christmas.

The bereaved couple, with no choice but to carry on, plan a subsequent year of vivid activities. She grieves by reflection, he by action; she puts on her coat to see her counsellor; whilst he, at his computer, sends emails about photoshoots. But both are determined to move forward, to believe again in normality of nature. And 16 months later, on the same chair she sat on in her faux-fur coat, she is naked, the pink line of the Rhombus of Michaelis bulges to send a new female life gurgling onto the bedmats below, heralding a healing of bitterness yet at the same time a definition of loss of the firstborn. Within a garden resplendent in spring colours and even a 7-foot polystyrene octopus tentacle made for a photoshoot in their previous year of defiant creativity, the pretty swing-bench pulses gently with the weight of a mother who is new and yet not new, cradling a piece of rainbow. 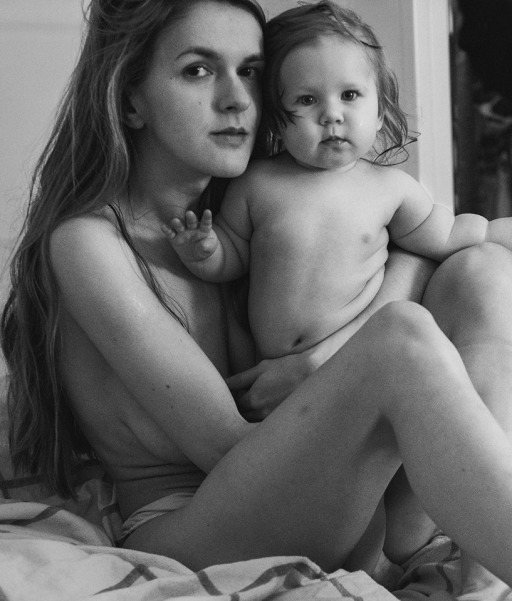 And now, that rainbow child babbles and grabs, gapes like a Great White for mother’s milk whilst kicking her sides like a gazelle and poking in her mouth like a dentist. She scuttles like a spider across the floor toward plug sockets, puckers her lips like a bawdy cartoon as she picks up, turns over and examines closely a credit card in her delightfully pudgey yet precise baby fingertips. Her hair, blonder with every wash, now pulled into a ponytail (like a cross between a studious little girl and an Italian gangster) falls Labradoodle-loose over her face in the dozy mornings all in bed together when we revisit the screwed-up eyes of her nuzzled newborn face. Another nap, another recharge, a flush-cheeked doll with eyes like bright blue buttons, now standing up using daddy’s chest as a platform looking over like a meerkat to squawk at the cat, with the widest Buddha grin as we drop her backwards in a sailor-dip-kiss that shows off her new four teeth – and maybe a bit of broccoli secretly stored from her earlier self-fed lunch. She is complimented everywhere we go. It is like carrying a little ray of sunshine, who seems to have no problem staring intently into countless new faces whilst being held in numerous strange and perfumed arms, as yet again someone compliments her confidence and temperament. She is the ‘watcher’ her father was in his babyhood. 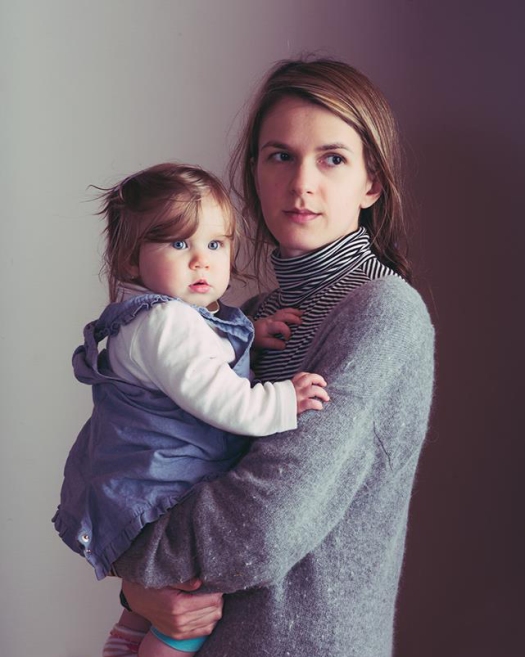 And now we are moving on. Funny that when we first arrived here, the key came with a giant ‘MUM’ keyring which we detached with confusion as to why it had been left attached for the tenants. But this place is what has made me exactly what it spelled out, and I write this on Mother’s Day here in the UK, reminding myself with half-surprise that this day, despite a commercial gimmick, is here for me too. A mother who was already parent to a bittersweet little boy before the chub-rolled arms of her daughter wooed her world. A mother to whom homebirth was the dream, twice fulfilled, and now sells the bed and the chair upon which she met each of those two precious progeny, with sadness but keenness to detach from material possessions and write the next chapter of life. For ‘you cannot write the next chapter if you keep reading the last one’. We are leaving the village where Evan’s body will forever rest, knowing that we have no duty to stay by his gravestone as his energy moves with us. Scientifically in fact, for his male cells left behind in my body mean I carry more of his memory alive within me.

This is not an ordinary house move. What’s coming is a change of life tempo, a way of living that in Matthew’s words ‘our consciousnesses couldn’t have contemplated 5 years ago’. It is an exciting shift in crazy creative living, with risk and what-ifs and are-we-sures, and yet at the same time we don’t want to go forward a different way. It even makes me grateful to live the life of a renter obliged to move on, because it’s given us a taste for new pastures and now opened up a new door in our minds that otherwise might have stayed shut. All will be explained in blog posts to come, but for now, we continue dismantling our home methodically and somewhat cathartically, preparing our long drive to our new home, Britain’s most delicious county… Devon.

5 thoughts on “End of an era: on motherhood & metamorphosis”